The next part of my Irish Country Living series.

A few weeks back we decided the time had come to wean the crias from their mothers. This is usually done at about 9 months and it gives the pregnant mothers a chance to build up their reserves before giving birth again.

Well,as you can imagine there was much giving out, on the part of the mothers and the crias. We had tears and tantrums, straining of elegant necks to see if ones offspring could be spotted. And, as with humans the male crias took it the hardest and one little fella took to hunger striking for the first few days!
Eventually they began to settle and normal service resumed.
It got me thinking though.
•Our pregnant females get time to themselves to rest and get ‘on the zone’ for their upcoming arrival.
I got extreme nesting syndrome and batchcooking.
•The alpacas get the ultimate fussing on production of their cria.
I got “the holiday’s over now, you can wheel your own suit case”!
•The crias are up on their feet within an hour of birth
I got sciatica from carting around each of mine for up to two years.
•The crias feed as and when they wish.
I got snowed under with books on ‘routine’ and badgered by people telling me ‘that child needs a bottle’.
I’m considering coming back as an alpaca in my next life.
And as with humans there are many different types of mothers.
There’s the ‘look at me back in my skinny jeans’ mother. These make fine but emotionally unattached mothers. They are usually to be found strutting their stuff along the fence nearest the boys field.
Then there’s the ‘Liam Neeson Mother’ she is the ‘if you touch my cria I will hunt you, I will find you and I will spit at you’ type of mother. A good instinct but can be a pain when essentially checking of the cria needs to be done. Thankfully there aren’t too many of these.
There is the helicopter moms, they are a less fierce version of the Liam Neeson Mother…they do a lot of faffing around the cria and watch you like a hawk if you are near them but ultimately will let you into the circle of trust.
And finally there is everyone’s favourite, the happy clappy zen mother. She is just so pleased with everything she is only delighted to share. Crias curiosity means that they are incredibly friendly and playful. This type of mother means we get great contact with the crias and thankfully most of the mothers are like this.
So roll on cria season, we are all set to welcome another crop of these gorgeous animals. 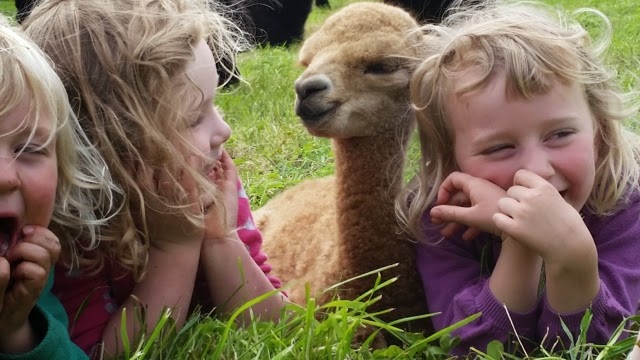 Alpaca facts; Alpacas are induced ovulators, the male makes a noise during mating called orgling, this induces the female to ovulate and so the females can get pregnant at any time don’t have a cycle that needs to be watched.