Skip to content
Part of my series for Irish Country Living
So after a long winter and spring of minding, dosing, preening and caring, all our hard work has started to pay off and the maternity ward has officially opened here on the farm.
Our first cria was due a few weeks ago, but the cold weather meant that her mother decided to hold out a bit longer until things warmed up.
We watched, we waited and finally last Thursday there was signs of activity.
The expectant mother was seperating herself from the others, she was looking disgruntled and was vocal in her annoyance at anyone who came near her, all seemed a bit too familiar!
Himself was phoned to say that I was confident she would deliver that day and I was under strict instructions to keep a close eye on her.
I stayed, I waited but like the proverbial watched kettle, not a stir.
A school run interrupted my observations and on our return, we arrived just in time to see the cria land.
There was huge excitement and a flurry of activity as the maternity bag was retrieved. The eldest child was in charge of applying the iodine to the umbilical cord, the next child was timing to ensure that the vital first feed was taken within the first hour of birth and a short while later when the afterbirth was delivered our five year old declared, after a thorough examination of it, that it was intact and we could phone daddy to say all was well. Veterinary schools of Ireland watch out, the MacDonnell girls are coming.
Then we needed to know of it was a male or female, there were so many body parts being identified I thought we had an  hermaphradite on our hands at one stage, but we established it was a little girl and so we phoned the chief farmer to relay the news that a gorgeous, blue-black little girl had joined the herd. 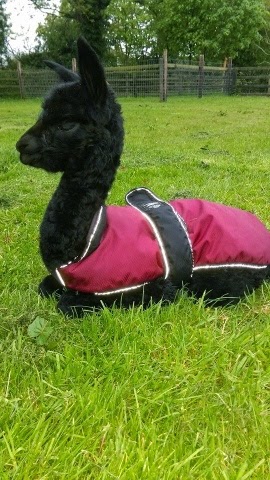 The arrival of new life never loses it’s fascination, never becomes routine and is never, ever taken for granted.
Bellissimo of Hushabye Farm has kicked off the cria season 2015 in style and here’s to many more days like this.