Part of my series for Irish Country Living
‘You’ll have to stay behind’ came the words I had been expecting.

A late evening delivery of a very tiny cria meant that, some extra TLC was going to be required.
His small size and weakness meant he was struggling to feed and as his mother is blind she was finding it difficult to find him in the paddock.
Seperating and enclosing them together was not working as she was getting stressed and pacing looking for the herd and therefore not allowing him to feed.
This was going to take time and patience and so I needed to stay put.
The chief farmer, our mini farmers and four of our friendliest alpacas were off to Barretstown Camp to take part in their open day.
We have been bringing the alpacas there for a few years now and we never fail to be inspired by the place, by the amazing volunteers and most especially by the wonderful children who attend there.
It is very much Paul’s gig as he was the person who first connected them and in fact he and the children had been a number of times before I got to join in the ‘serious-fun’ and so it was only fair that they got to go.
There was more than a twinge of envy as I watched them head off, knowing that they would, as ever, have a fantastic time and they would get so much more from the day than they could possibly give. 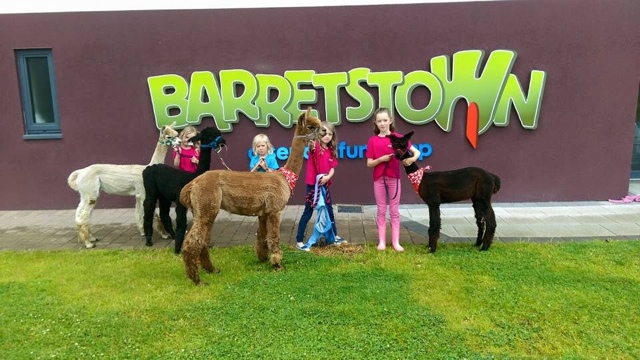 We had given the cria some plasma and some goats milk to help strengthen him and then it was just matter of repeatedly moving him to her, until she figured out his voice and until he learned to follow her.
There were some dodgy moments, thunder downpours meant that he was left slumped in the rain, not knowing to take shelter, and his mother unable to guide him.
I rescued him and brought him in to the kitchen to dry off and warm up.
His plight may not have been helped by the exposure to some rather blue language as I bellowed at the radio listening to Cork being robbed by the referee of their deserved Munster Football title.
His urgency to find his mother, and stick by her may, in some small part, be as a result of the ensuing rant, well I guess every cloud has a silver lining.
And later when the Hushabye team arrived home I heard stories of a wonderful day, of zip wires across lakes, of crazy golf, coconut stalls and canoeing.
Of children, many of whom have faced some heartbreaking struggles, who have been through more than any child should ever have to go through, smiling and laughing and falling in love with our gentle alpacas, who spend the day leading them, hand feeding them and getting the ubiquitous selfies with them.
I didn’t have to tell them the story of my day, because there in front of them Mother Nature had done her bit and our mother and cria had it all figured out, they were lying side by side, this tiny but tough little cria snuggling in with it’s mum as nature intended.
All envy of their great day out was gone, because I too got more from the day than I could possibly give.
So overall a great result for everyone, except the aforementioned Cork footballers, but we live to fight another day…our day will come.