I had this on a night out with some lovely other parenting bloggers and I was dying to make my own version of it. It’s a very easy dish and like all risottos it is real comfort food. This recipe serves about 6 people, unless my husband is at the table in which case it would serve 4!! 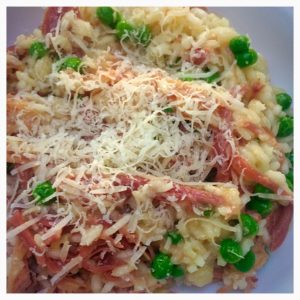 Ham hock is such an inexpensive piece of meat and you get such great value from it. Ask your local butcher or better still you local free range pig farmer.

A large cup of frozen peas, allowed to thaw for 10/15 minutes

1 1/2 ltr of the ham cooking water, simmering in a separate pan *

Place the ham hock in a large saucepan and cover it with cold water. Add in the onion, quartered, and the bay leaf and a few peppercorns. Bring it to the boil and then turn the heat down to the lowest, cover and simmer for about 3 hours, at which time the meat will be falling off the bone. Remove the ham from the water and take the meat off the bone and shred it, watch out for any sinew and discard any you come across. Strain and reserve the cooking water. You require 1 1/2 ltrs for the Risotto. If you have any left over freeze it for making soup.

Melt some butter in a large heavy bottomed pan. Add the sliced leeks and cook slowly until softened but not browned. Add in your rice and stir to give the grains a coating of butter. Add the glass of wine and stirring occasionally allow all of the wine to be absorbed before adding the first ladleful of stock. Allow each ladleful of stock to be absorbed before adding the next one. Stir occasionally but don’t be tempted to stir constantly. After about 15 minutes taste the rice as it will be coming close to being cooked. You want a slight bite but no chalkiness. Add in the peas before the last one or two ladles of stock and allow them to cook. When the rice is just cooked add back in your shredded meat, a small bit of butter and your grated Parmesan cheese. Season, but remember the ham will be salty so you may only need pepper to season. Turn off the heat and put the lid on for two or three minutes.

Serve with a final grating of Parmesan cheese.

*You may not need all of the stock, depending on the type of rice you may require less, taste as you go and only add as much as you need