How quickly the week flies around and here I am planning another week of food. Karen over at Beating Myself Into A Dress suggested that I do a look back at the previous week and include some pictures, which I think is a great idea. So, at the end of this post I’ll pop up a few pics of last weeks dinners and note which were hits and which were misses. 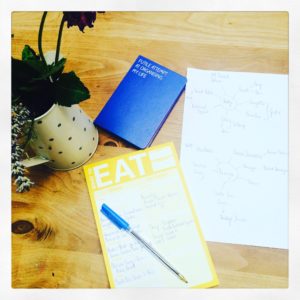 Baked ham with mashed potatoes and veg. Old school but popular and any left over ham is great for school lunches during the week.

Lemony Sumac Chicken Traybake. This is a really handy Traybake, everything in one dish. The Chorizo in this is the bit that the kids fight over and any veg left over from Monday will be served with it.

Pasta with Pesto and garlic bread. This is probably the easiest dinner in history!

Baked Salmon topped with pesto and Parmesan Breadcrumbs.The grown ups will have Hake topped with pesto, sliced tomatoes and buffalo mozzarella, this will also be baked in the oven. We’ll have this with Broccoli, Spinach and oven roasted tomatoes. Of course the ‘crunchy’ bits will have to be removed for the smallest boy!

Chilli con Carne, this is the dish that I’m most like to cook to death. When everyone loves it there is always the temptation to make it too often! We have it wraps and a big platter of chilli topped nachos to share.

Sinead over at Bumbles of Rice prompted me to look at Deliciously Ella’s flapjacks so they will be added to lunch boxes this week.

I also picked up some lovely fennel in the market on Saturday so some fennel soup will be made also.

So that’s this weeks plan.

Heres a look back at last week, the highs and lows.

I made this Tumeric Root Vegtable Soup that appeared in The Irish Times on Saturday, it was so delicious. We ate some and froze some, well worth making. I had Celeraic instead of Parsnip and Kale instead of Cabbage but it was lovely. 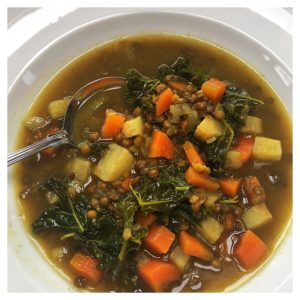 The grown up’s version of Wednesdays dinner was really good and shows what the addition of store cupboard ingredients can do to dress up a simple pasta dish. 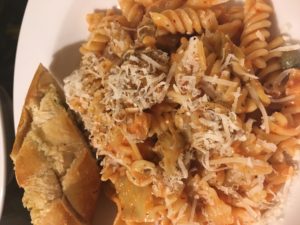 I made a new curry this past weekend which was a Lamb Dhansak from the BBC Food website, I served it with the kid’s favourite fruity chicken curry as a new dish served with and old favourite seems to work best here.

I made Rachel Allens Raspberry Swirls, these were an unmitigated disaster. The amount of liquid in the ingredients seemed far too much and it was impossible to roll the goopy dough. My 7 year old convinced me not to throw the whole lot in the bin and we spooned the mix onto baking tray and baked them. They actually tasted lovely so I would attempt them again.

The smallest boy refused to have the sticky pork stir fry so he had pizza instead, I hate serving two dinners and usually don’t give in, but on a Friday, for a little peace, all bets are off!

6 thoughts on “Meal Plan Monday| What We Eat”