What would you like to be when you grow up ?

This is the question that my youngest asked me recently. I was delighted that he still though I had growing up to do, though I think that may have more to do with the fact that his older sister is now the same height as me and is only 11, rather than any youthful appearance on my part.

The question made me think though.

Am I now all grown up and need not think about these kind of decisions anymore? Or is there still a long road ahead, one which I can dictate the direction of?

There is a phrase that says

I’m sure its meant to be inspiring, but it is one that sort of haunts me.

I look at my husband who took on a project 8 years ago and has worked incredibly hard ever since to turn it into a business, one that he is so passionate about, and still managed to do his ‘bread and butter’ day job. His drive and determination is something that I have nothing but admiration for, and yet I no longer fully understand it.

I understood it once upon a time. I opened my first practice when I was 24 and by the time I was 28 I had opened a second one. I worked really hard and loved the feeling of setting and achieving goals and I remember the feeling of pride at doing so.

These days my most frequent goal is to get through the day without shouting, and it’s one I fail at regularly.

When the children came along my focus changed and I was delighted to step back, not from work but from the responsibilities that went with running a business.

I am happily doing a job that I like but I couldn’t say that I love. And therein lies the difficulty. I have no idea what it is I would love to do.

I like cooking but couldn’t imagine doing it for a living. I really enjoy writing but as soon as it feels like anything other than a hobby it is as though my brain seizes. In my imagination I flit between ideas but there is no one thing that stops me in my tracks and makes me want to pursue it.

So, am I lacking focus? Drive? Ambition?

Or is that just another excuse for not changing anything?

An achievement is defined as the accomplishment of something by superior ability, special effort or great courage, therefore achievements are rightly applauded.

But is it okay to lead an ordinary life, to get up each day and try make the most of what the day will bring, without having a grand plan, without having that goal in the distance that you are working towards?

There is wonderful quote by William Martin that I think of often when it come to my children, but have never thought of applying it to myself.

“Do not ask your children
to strive for extraordinary lives.
Such striving may seem admirable,
but it is the way of foolishness.
Help them instead to find the wonder
and the marvel of an ordinary life.
Show them the joy of tasting
tomatoes, apples and pears.
Show them how to cry
when pets and people die.
Show them the infinite pleasure
in the touch of a hand.
And make the ordinary come alive for them.
The extraordinary will take care of itself.”

So maybe an ordinary life is a gift after all.

It is not lauded or eulogized, but maybe that is it’s secret joy. 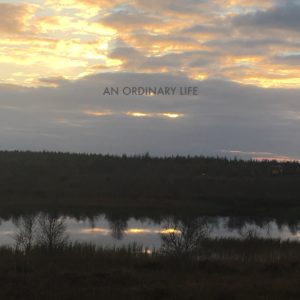 6 thoughts on “An Ordinary Life”