5 days, its a long time without leaving your house, well technically we did leave the house but we travelled no further than our legs could carry us.  We squeezed every ounce of joy out of the snow that has dominated every news feed and conversation since last Tuesday. 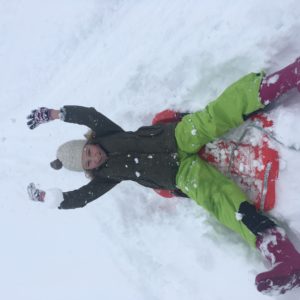 By today though we were done, toboggans were left sitting abandoned by the door, there was no scramble for gloves and the hall stopped resembling the place that wellies came to die.

And today we got out, we escaped the clutches of the snow and got into town for a well earned coffee and some cake. I sat in the coffee shop with my girls and amongst the chatting and the laughing I bumped into an old friend. We chatted, mostly about the recent weather, and suddenly I realized that the was no edge to the conversation.

You know that edge that accompanies being distracted while with your children, that impending sense of doom that happens if the conversation goes on for too long and the children realize that your attention is elsewhere and so take full advantage.

Extra treats are asked for, because children can smell the fear of a public meltdown and know there is a good chance of a yes when in other circumstances it would be a no. There is a real danger that you will get called out, in public, if you try that fall back of all parents…the fake smile, accompanied by the ‘no dear, you can’t have a third slice of cake’ only to have your child state loudly that you don’t really mean the smile and she knows that she is in trouble later…yep, proud parenting moments we’ve had a few!

But today as I chatted with my friend I noticed that the children were chatting amongst themselves, laughing and sharing cake and I realized that this had been happening for a while, a slow but definite change that meant there was no micromanaging required. An ease had crept into our outings so quietly, so subtly that I’d hardly even noticed.

They have become, dare I say it, relaxing.

2 thoughts on “And Relax”