Sumo was our beloved pot bellied pig….she was huge and black and once described as “so ugly she was almost pretty” !!She passed away last night after just 3 days of being not just herself.
Sumo came to us from another family who my husband happened to be doing a job for, they could no longer keep her and they needed a new home for her. My husband always wanted a pot bellied pig so he was thrilled to take her, I had always thought that pot bellied pigs were actually quite small so I was pretty surprised when this enormous hulk of a pig arrived.
She arrived in a trailer one day and sat in the trailer for 4 days and refused to budge…no amount of food could tempt her out of it…we tried everything but eventually Sumo had to suffer the indignity of being tipped into the bucket of a digger and deposited in her new field.
She was so big when she arrived that although there was only a small piece of wood at the base of the door Paul had to build a ramp for her to go in to her house because she could not get her belly up over the door base…she was put on a diet straight away!!
She very much did her own thing from the start and was quiet happy until the arrival of two of the naughtiest goat ever created…Billy and Betty our pygmy goats did their very best to torture Sumo..they went into her house when she was sleeping and continually butted her until she squealed so loud I could here it through the baby monitor!! I’m surprised the neighbours never called social services because her scream was so child like I’d say the neighbours thought I was murdering the kids, eventually we had to separate the goats from Sumo so that she could get some peace…she loved to make a big nest around her with her hay and slept for a large portion of the day.
We don’t know what age she was when she came to us and was in her usual for up until the weekend but for the last few days she would not leave her house and this morning when Paul went to check on her she had died. 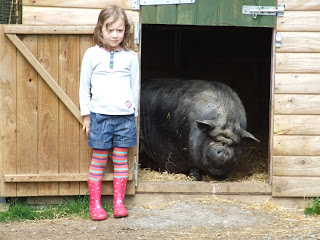 She was moody and cranky but was very much part of Hushabye Farm and she will most definitely be missed.