Last weekend, with high hopes, we packed the car and headed south on our holidays. Our destination was the beautiful coastal village of Ardmore, where my sister and I had a house taken for three weeks. The kids all slept for the journey which, as anyone with kids knows, is the best kind of journey! We arrived at the holiday house, which was gorgeous, located down a quiet road and a stroll up the hill from the beach. Within minutes of arriving the kids had declared it ‘the best holiday ever’. My brother in law, sister and her kids arrived and we all headed down to the beach….bliss!

Within minutes of arriving back at the house my two year old had locked himself in the bathroom, the one with the very small locked window. After 10 sweat inducing minutes of me trying to explain to a two year old, who doesn’t yet know his ass from his elbow, that he needed to take the key out of the lock and push it under the door to Mummy, unbelievably he understood what I was telling him and managed to do it. When he was free and I calmed down I reminded myself to give him more credit in future.
The following morning the key for my car began to act up and the car was refusing to start, so after much stress and some car juggling between my brother in law and younger sister, I ended up with a car while the garage ordered a new key for mine…phew, another crisis averted. Whilst the older kids were being brilliant and having a ball, as only cousins can, my two year old was doing what most toddlers do when taken out of their own environment and punishing me by morphing in something from The Omen!!! His latest method of inflicting punishment is to wait till you are not looking and then run at you, head down, to deliver the most painful dead leg imaginable.
The only down side of how well the cousins were getting on is that the noise level doesn’t just double when the number of children doubles, it quadruples!! 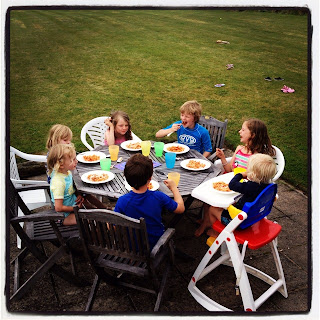 Meal time began to sound like feeding time in the monkey enclosure at the zoo, and so one morning I spectacularly lost it, my niece and nephews stood aghast as ‘Aunty Lilly’ became ‘Crazy Aunty Lilly’, I will have to work very hard to erase that memory from their innocent little minds….ooooops!!

In amongst all the chaos there have been amazingly wonderful times, those moments that you just want to bottle and keep forever, like the post dinner stroll to the beach to catch the last rays of sun. 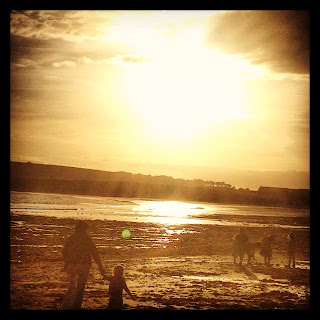 And the joy of rock pooling at the gorgeous Goat Island 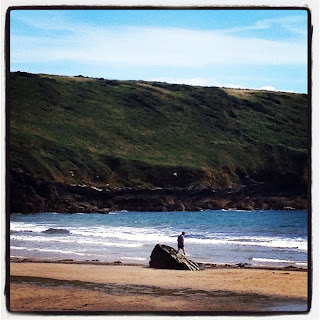 And watching my children, niece and nephews play on the beach of our childhood, Clonea, and seeing them create a new generation of memories just as my sisters, brothers, cousins and I did over 3 decades ago. 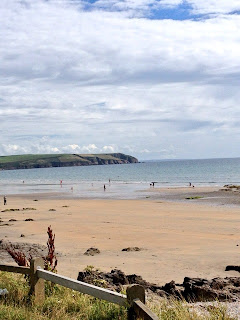 I’ve read beautiful blog posts of seemingly effortless family holidays, where, from sun up to sun down, the days are filled with fun, laughter and joy….ours is obviously nothing like that, holidaying with 7 kids under 8 is never going to be a walk in the park but as I sit with my sister in the evenings, when the kids are fast asleep, and over a glass of wine or two we laugh, as only sisters can, about the craziness of our lives I know it’s all worth it.
We are home briefly this weekend to see our Alpacas compete in Tullamore show, and then we’ll return to Ardmore, so tune in next week for Part 2 of “Holidaying on the Edge of a Nervous Breakdown’ !!!

3 thoughts on “Holidaying on the Edge of a Nervous Breakdown”