On my way into Tescos this morning I passed a very frazzled lady walking out out talking very loudly on her phone, as she sped past I could clearly hear her say ‘ I hate Tesco’. I wondered what caused such a strong statement, especially as she had a trolley full of groceries so Tesco had clearly fulfilled their end of the bargain.

I proceeded into the supermarket with my two and a half year old in tow. 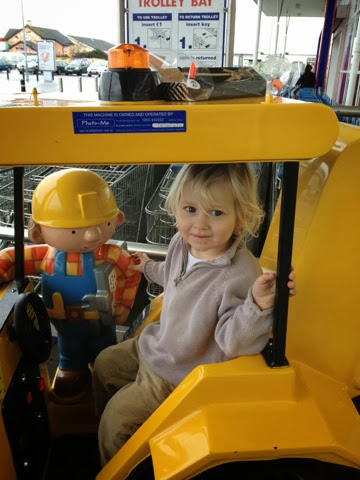 Just inside the door there was the first of a number of tantalising treats to catch Noah’s attention. I managed to distract him and we proceeded through the first few aisles incident free. We pottered happily through the vegetable aisle, all the time I’m doing that incredibly annoying middle class chatter to keep Noah’s attention, you know the one that goes something like this…
‘Yes that’s a courgette, can you say courgette, some people call them zucchini, isn’t that a funny word, zucchini ? Is that the coriander your pointing at…no Mummy doesn’t need coriander today’ and on it goes, driving anyone within earshot demented! I have no idea why I do it but as soon as we enter the supermarket I click into this mode that continues the whole way around.
We stopped and chatted with the man at the fish counter, this was all going swimmingly well, and then…….
We left the security of the fridge areas and from that moment on we were accosted with every type of sugar coated, enamel wearing, cavity causing treat imaginable.
Every aisle we entered had something to cause the little man to streach out his hands trying to grab them.
There was chocolate masquerading as cereal, sugar masquerading as ‘breakfast bars’, in the bread aisle there were cookies laden down with smarties, at the end of almost every aisle there was something to tempt the little guy and eventually he snapped…he seriously lost the plot, all this temptation was just too much. He stood up in the trolley and refused to sit back down, he was so upset I had to take him out of the trolley and thought I might be able to get the last few things with him in my arms. That lasted all of 3 minutes before he squirmed out if them. We were now in the aisle selling light bulbs so I thought we safe….but no, right down at the end was a stand with bags of sweets on it….aaaaagh!
Of course Noah had spotted it before I had and within 30 seconds had a bag clutched in his cubby little mitts.
At this point I had to assess whether I take him on and get the sweets off him or not.
He had already two lollipops, which he had been by given by the lady in the butcher…she originally gave him one but he inhaled it while I was ordering and threw himself on the floor demanding another…she caved in before I had time to object. His tantrums have gone up a notch recently, I think her realises he is half way through his reign as a ‘terrible two year old’ and wants to make the most of it!
I also had to check that I had enough time for a meltdown…quick look at the time showed I had 45 mins before pick up so I took a deep breath and prised the bag of sweets out of his hands….
Wow…what a meltdown ensued, he kicked and screamed, threw himself on the ground and started randomly knocking stuff of shelves. I picked him up, no easy task, and attempted to return to the vegetable area for some forgotten veg, just as we were passing the aforementioned fish man Noah delivered an excruciatingly painful punch in the face…..I can still see the poor mans expression!!
Away from the source of temptation he finally calmed down and we got through the checkout unscathed.
But one of these days Tesco, I will unleash the poor, over-tempted two year old to do his worst, he can eat his body weight in sweets if he wants to and I will not be paying for them. If supermarkets wish to place temptation at every turn then they have it coming….if my mental health has to suffer then so should their profit margins!!
And as for that woman who was leaving when I was entering…..I am inclined to agree!