Spaghetti combined with a sauce made with two ingredients that even the might of Persil cannot combat….red wine and tomatoes, added to this clothes tattooing duo, you have the delicious but lethal oils of chorizo, it can only mean one thing…ruined tops. There is no going back from these stains…no amount of Vanish, no length of soaking has ever been successful in removing them.
There was a time that this combination for dinner meant that, once they were at the stage where they refused to wear bibs, I would insist that they wear an old tee shirt over their clothes. That genius idea of mine soon went they way of the bibs and I had to make peace with the fact that if we were having Chicken and Chorizo for dinner then the children would ’emerge’ from their bowls looking like they had just visited the nearest abbatior!!!
Then tonight something wonderful happened.
Four very hungry children sat to the table, they picked up both their forks and spoons….they forked and then twisted the spaghetti into masterful twirls……and they managed to get each and every forkful into their mouths.
There was no slurping of spaghetti.
There was no slip between bowl and lip.
There was no wayward string of pasta, swaying repeatedly from fork to top.
There were clean plates all round.
There was messy faces BUT there were clean clothes!!!!! 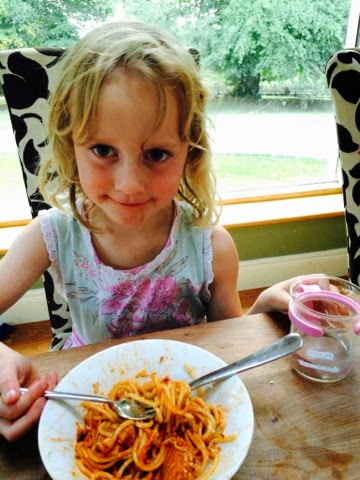 If ever there was evidence that our little family is growing up….THIS IS IT!!
Go on…take The Spaghetti Test and see what stage your family is at.

2 thoughts on “The Spaghetti Test”