Last week I posted a picture on Facebook and also on Instagram. It was of a walk we did in the Slieve Blooms on a Sunday morning.

It was nothing special, just a run of the mill photo that I felt like sharing.
Later in the day I was chatting to my sister when she mentioned that she had seen it and that it looked like we had a lovely time.
This is the picture. 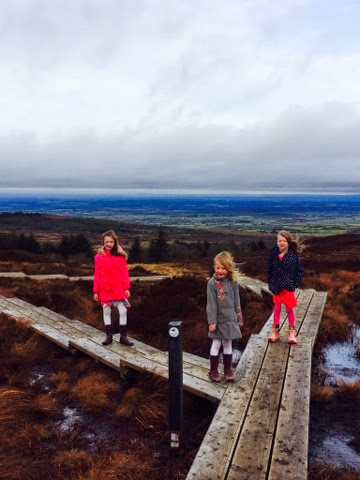 This captured a windswept moment with a lovely view behind it.
We had just had a bracing walk as far as this point and it was great to clear the cobwebs after being stuck inside with a virus that the kids had had.
But that was just one moment, the truth of the day was somewhat different.
As I took the picture my 3 year old was clung to my leg whining.
He then refused to walk any further and had to be carried-no easy feat in gale force winds on the top of a mountain.
Then, less than 5 minutes after taking this picture, Madeleine ( the little one in front) got blown off the boardwalk and into a mucky pool of water…cue hysterical laughter from her sisters which meant she sat, frozen, in a sulk and refused to move-as my mother would say “she would neither lead nor follow”.
The older two ran further off up the boardwalk as I was busy trying to explain that the only way to get back to the car was to walk back down.
This meant that the whiner, at this stage on my back, the soaking sulker and I had to walk further up the mountain to get them back, adding aching backs and more misery to the situation.
Finally I got everyone back to the car.
Wet clothes were stripped off, the heat was put on and hot chocolate was dished out. I was ready for a hot whiskey or ten at this stage when I hear giggling from the back as the girls chatted about the morning.
As they finished their drinks and passed back their cups they piped up with “thanks Mum for bringing us, that was the best walk ever”. Wow I thought, our other walks must be absolute rubbish!
Posting the picture made me think though.
A picture will capture a moment but it doesn’t tell a story.
More often than not it represents an island of happiness is a sea of chaos.
But maybe that’s what memories are, snippets of goodness, slivers of joy easily picked out and leaving the everyday, the chaos,the mundane behind.
And maybe that’s how it should be.

4 thoughts on “A Picture Tells a Thousand Lies”