Skip to content
My latest piece for Irish Country Living 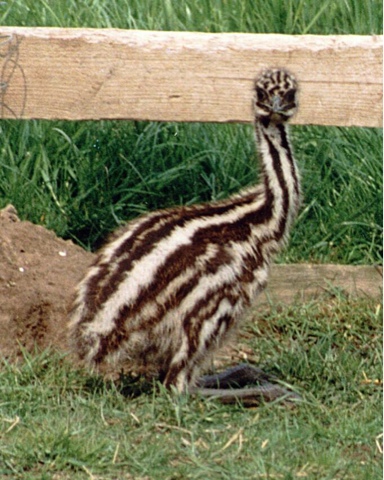 “It’s e-miu Mum, not e-moo” she said. Right now I’m not too concerned about how it’s pronounced I’m just wonder why there is not one, but two, emus in the back of my car.
“But you just went to get some chick crumb” I mutter feebly.
After ten years of being married to the most unpredictable man in the world you would imagine that I wouldn’t be in the least bit surprised to see him arriving home from the poultry market with two young Emus, and yet I’m am both surprised and somewhat horrified.
The kids are wild with excitement, the emus were too judging by the amount of defecation that had taken place in the back of the car!
“Aren’t they gorgeous” says the overexcited grown up.
If ever there was an animal to dispel the theory that all babies are beautiful, emus are it, gorgeous is not the word that springs to mind when you see them!
“How will the alpacas react to them?” I ask.
“They’ll be fine” comes the confident reply.
I am desperate to remind him of the disaster that was the pigmy goats. Billy and Betty, the naughtiest goats that were ever born, that climbed every fence, that ate every plant, that spend their days harassing, head butting and torturing our pot bellied pig. The self same goats who spent a large part of their day being chased by me and my trusty sweeping brush, who eventually had to be re-homed with the people who had originally sold them.
Yes I really want to bring them up, but I am surrounded by a bubble of excitement so I say nothing, who am I to spoil the party.
And so everyone busys themselves getting their new home ready. The initial excitement of the emus must have worn off because after 10 minutes one has made its bid for freedom.
“Run” shouts himself.
A forty year old woman versus a bird that can reach speeds up to 50km per hour on land, the outcome is pretty inevitable, Thankfully mid-run she remembers her mate and double backs and in a move that Paul O’Connell would be proud of out eldest performes a stunning tackle and catches the escapee.
Once returned to their newly secured home, we retire for lunch and the issue of naming them raises its (long) neck.
After a season of naming cries we are struggling to come up with some.
The chief farmer is considering Bonnie and Clyde, I’m considering Gin and Tonic, both the name and the drink.
All suggestions would be gratefully received.
No need for messing about with Eircodes.
Answers on a post card to ;
The Reluctant Farmer
The Funny Farm
Somewhere in Middle Ireland

3 thoughts on “The Reluctant Farmer | Emu to You”