We wanted her before she was conceived, we were updated as the birth happened and eight weeks on, amidst great anticipation, the children bubbling, cauldron like, with anticipation, she arrived. Welcome to the family Miss Rua. 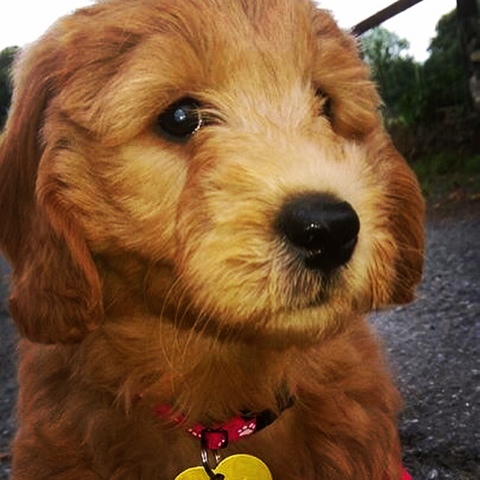 Introducing the newest member into our family isn’t without it’s problems.
The first one, to be expected,is the heartbreaking nighttime crying. The adoring children and besotted husband that fuss over her all day are conspicuously absent when she needs to be settled/go to the toilet/have her blankie fixed in the middle of the night!
Then there’s the toilet training. Thankfully she is paper trained ( mostly) and I’m hugely grateful for that, but the new house means there’s some confusion and therefore some mess.
And then there is the CONSTANT repetition of ‘can you put her down, just let her walk, she needs to rest’ to her exuberant new owners.
But the very worst thing about it is the GUILT.
Here she is, this gorgeous fluffy ball of fun, living it up indoors with us, and all the time our handsome, but crazy, Labrador is sitting pinned to the windows looking in, and I’m convinced he’s wondering what he did wrong. 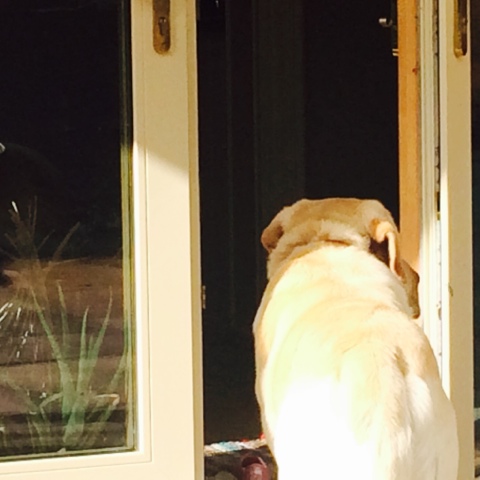 She was, and still is, meant to be an outside dog, although I may have a battle on my hands to ensure this happens, but she needs to stay in until she’s a few weeks older.
Meanwhile George is doing his best to join the party! 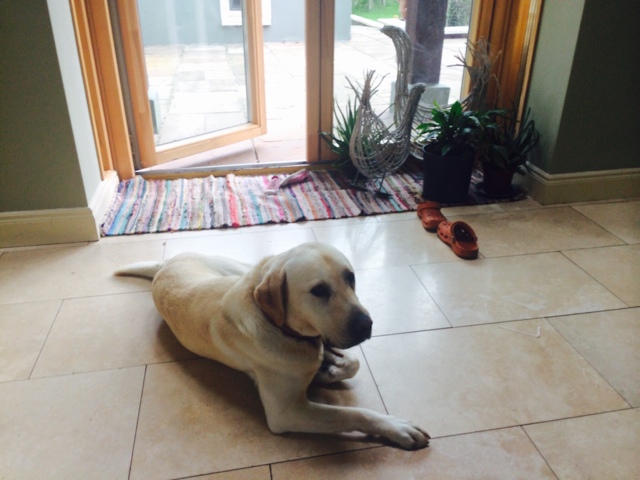 The problem is, he’s as mad as a box of frogs.

If you pet him, or give him too much affection, you are rewarded with either a ‘playful’ headbutt or one of his speciality ‘hugs’, believe me when I say, this is not a welcome thing. He’s also prone to attempting to hump things, he loses it when the children play chase with him and starts running in a circle, at breakneck speed and everyone has to take cover or risk being mown down by him.
He barks at people he sees almost daily, he breaths VERY heavily and his ever wagging tail hurts like hell if you stand too close.
He also likes to eat one of the chickens every couple of months or so!
On the plus side, he is an amazing watchdog, he’s ridiculously loyal and he’s always happy.
None of this helps with the guilt. I have no idea how Rua will turn out, she may well be as mad as him, but right now she is being treated like royalty and although everyone’s been warned to be extra nice to George ( while carefully avoiding being headbutted, hugged, humped or mown down) I feel so sorry for him and wish I could explain it to him.
Bringing home a new puppy when you already have a dog, well it’s a teeny bit like bringing home your second baby.