I will preempt your eyerolls by admitting 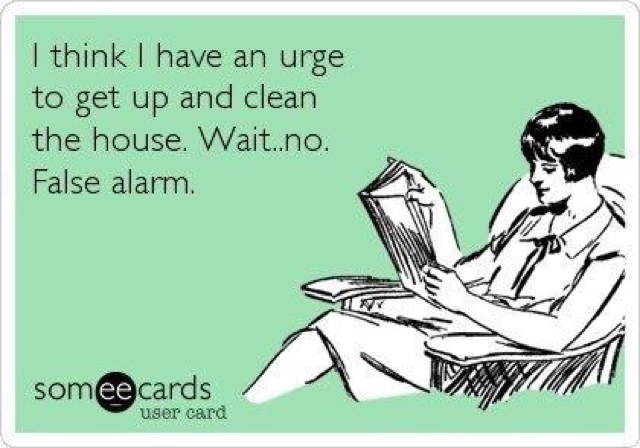 Now that we’ve that out of the way I’ll tell you my story.
So, having had two amazingly wonderful cleaners for a long number of years it came as quite a shock to discover that the number of bad ones seem to far outnumber the good ones.
We have had a series of disasters with our last few cleaners.
One so obviously used to vacuum around things on the floor that I started playing a type of game whereby I would leave things on the floor in precise angles just to see if she moved them…I always won, granted I had the advantage seeing as she didn’t even know we were playing the game, but still!!
Another moved here and was actually amazing but decided after two weeks she was leaving as it was too cold, good at the cleaning but maybe not so much with the research!
Then we had the delight of our most recent cleaner, despite living here for more than 10 years her English was appalling, she nodded and said, in a very irritated voice ‘yes, yes I understand’ to everything I said, and then did the exact opposite.
She arrived at the wrong times, she arrived on the wrong day.
Who knew that “see you later” actually meant that she would arrive 5 hours after the agreed time and then leave in a huff because I pointed this out to her.
She left after two hours one day and stayed for six another… It was like a game of ‘what will the cleaner do next’ I guess a karma type revenge for my earlier game playing!
So it was with no small degree of trepidation I took on our latest cleaner, it started well, she understood my texts, replied in equally coherent texts…believe me this was huge progress!
She arrived, on the right day, at the right time. Took a look around and clearly decided that this was a ‘heavy duty’ clean and went to her van to get the cleaning equivalent of the big guns.
I went about my day, coming and going with school runs and food shops. After 4 hours she was still doing the bedrooms, actually pulling them apart, scrubbing skirting and cleaning them to their ‘we’ve just moved in’ state, I knew she meant business when she went to the magic cleaning van and came back with a ladder, clearly there was nowhere going to escape her attention.
When,7 hours after she arrived, she finally left she still hadn’t gotten to the kitchen and dining room, she mentioned she would start with them the next day. She didn’t say anything else, she didn’t have to, I could feel the judgement boring into me…
‘You are filthy’ that’s what she was thinking.
I wanted to protest, to tell her that a ‘deep clean’ is just beyond me with work and children but I was scared, what if she left, what if she and her magic cleaning van never came back, I’d be left here stewing in my own filth, so I just looked suitably ashamed and said meekly
‘See you next week’