Skip to content
Last Thursday was a big day, not only was it the smallest man’s birthday, it was also the day that we went on our much anticipated trip to see Aunty Jenny in London. 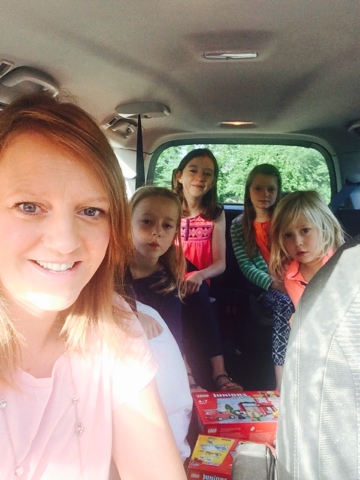 As you can see, excitement levels were FIERCE! 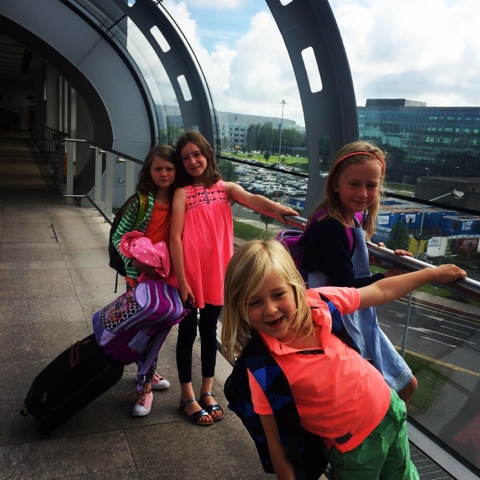 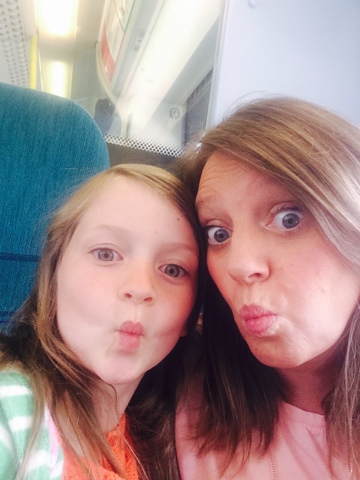 There was a small bit of trepidation about corralling four small people through Dublin airport but an early arrival meant it was all very easy and for the most part everyone behaved. There was some ( and by some I mean a lot!) of impatience as we waited for each part of the journey
In the car “wheeeeeen are we going to get to the airport”
In the airport ” wheeeeen do we get scanned”
In the queue “wheeeeen can we get on the plane”
On the plane “wheeeeen do we start moving….
Anyone seeing a pattern yet?
In between the whining though it was very pleasant.
Excitement levels skyrocketed when at the end of the safety announcement the aerlingus staff announced that there was a very important passenger on board who was celebrating his fifth birthday and called out his name, the smallest boy was torn between mortification and ecstasy.
The poor man who sat along side us had to listen to a monologue of ‘there’s another plane, and another one, there’s a cloud and another one, were in a cloud we’re out of a cloud’ for almost the entire journey, he also became the passer of colouring pencils and sticker books and bottles of water . Apologies if you are reading.
Apologies also to the elderly lady who got unceremoniously pushed out of the way in order to race to Aunty Jenny in arrivals who turned up with a birthday helium ballon for him, it surpassed all previous records and lasted a good four hours before being accidentally released to the balloon heaven in the sky.
London was much warmer than Ireland and the smallest boy complained instantly about his feet being to hot in his canvas shoes. A quick stop off in a shoe shop and despite my misgivings a very cute pair of Haviaianas flip flops were purchased. Within an hour my misgivings were realised and there was complaints that they were hurting is toes, lesson learnt for me and the next day another pair of sandals were being purchased for His Highness The Birthday Boy.
There is so much to see in London it’s almost hard to know where to start.
Top of the list was seeing Buckingham Palace and the changing of the guards, this was great.
After there was much discussion about the number of toilets in the palace, a very apt conversation considering we had one child with us who seemed determined to use every toilet in London, the moniker Tiny Bladder may stay with her for life! The changing of the guards and the pomp and ceremony was well worth seeing.
Next we headed to the Natural History Museum, it is AMAZING, there is so much to see there and it is all free. One child was fixated on getting to the Dinosaur exhibition which meant we rushed though some parts in order to avoid the simmering meltdown that was brewing. 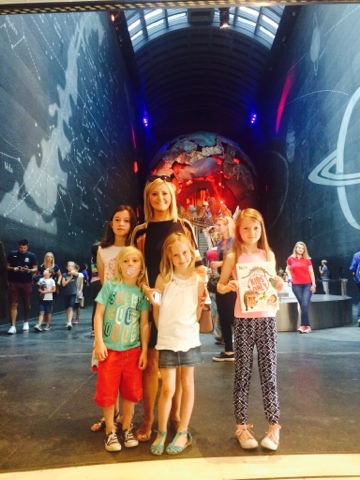 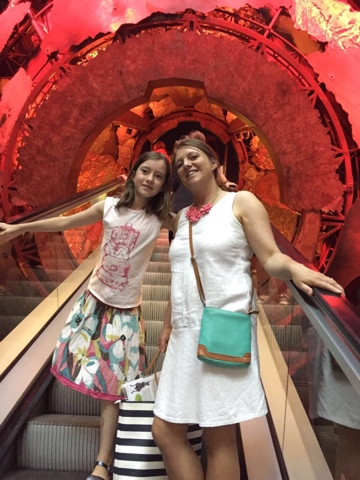 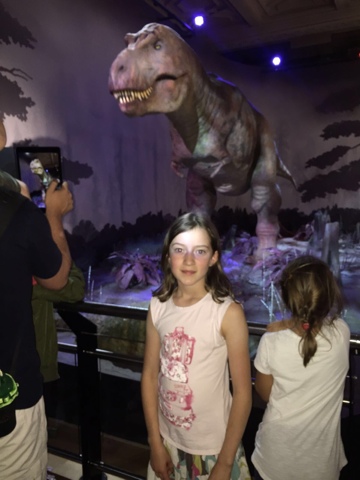 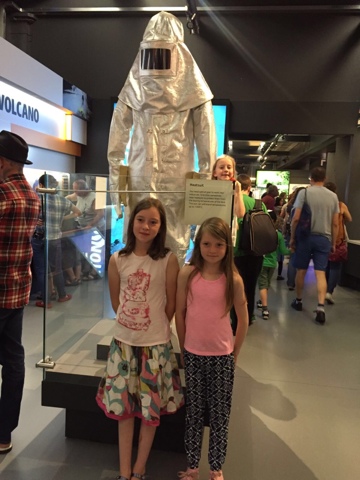 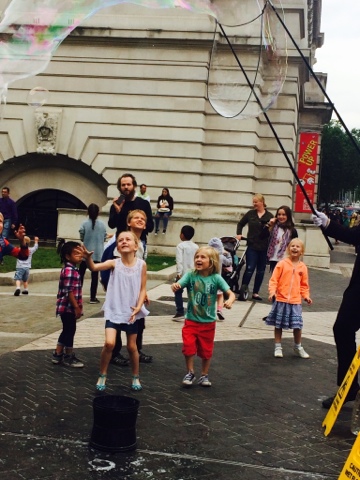 Aunty Jenny had booked the London Duck Tour as a surprise for the kids and it was definitely the highlight of the trip. Everything from the bus itself, with its open sides, to the hilarious and informative commentary from the guide, meant that both adults and children loved this. Going into the Thames and passing Big Ben and Westminister Abbey was brilliant. There were a few moment when a ‘Thames dip’ was looking likely as my children refused to stop hanging out the side but thankfully we got back in one piece and dry. 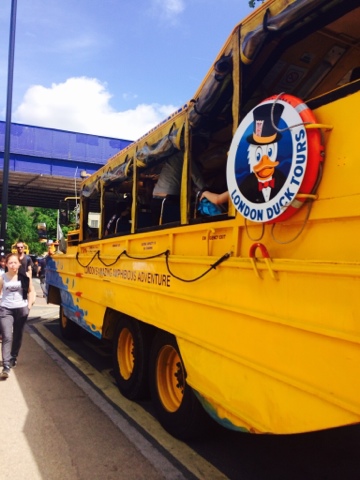 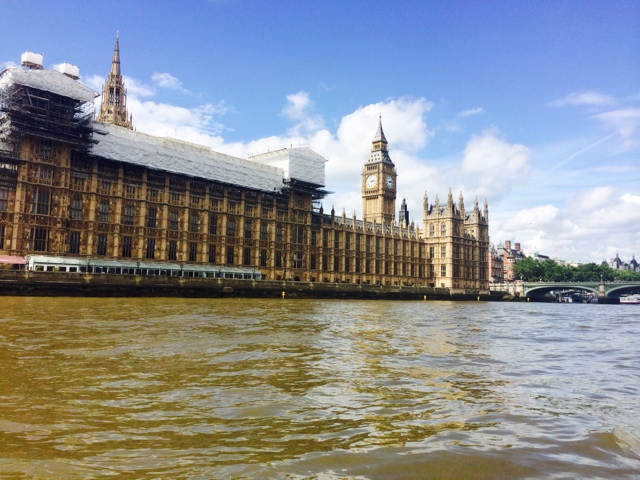 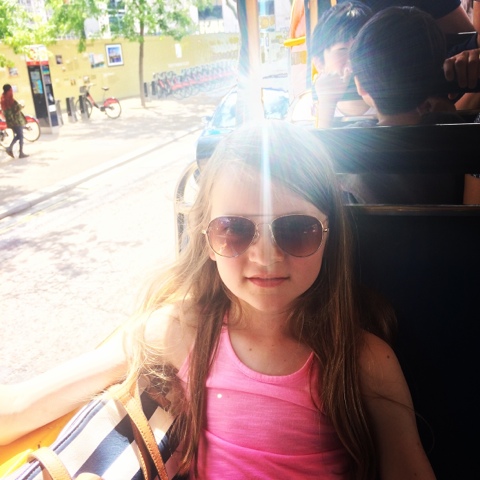 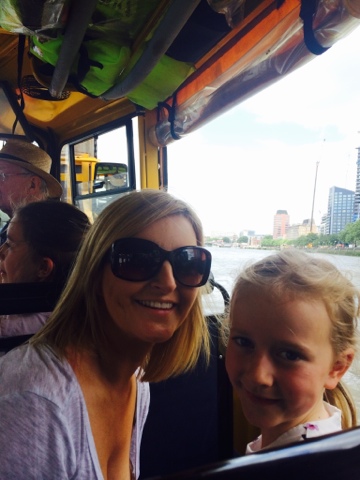 South Bank is fantastic, amazing street food, street entertainment and the London Eye. When the children realised how slowly this moved I was delighted that I hadn’t booked this because their impression of it was more along the lines of a big wheel and they all agreed that they would have been bored in it. 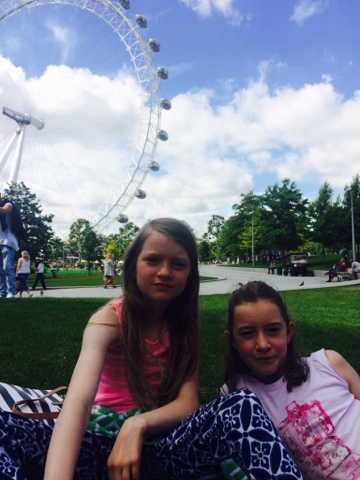 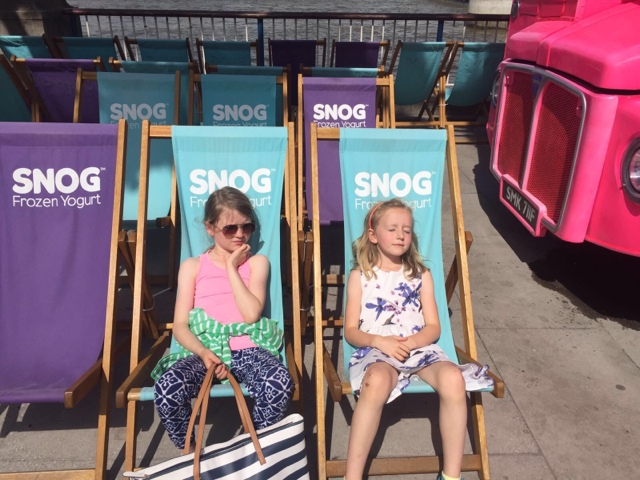 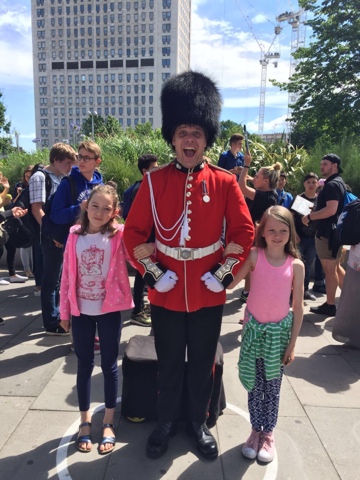 A trip to Battersea park playground on Friday evening had resulted in us booking the Go Ape Tree Top Walk there for Saturday evening. The children were really excited about this, I was less so when I realised that I had to accompany them due to the youngest being less than 6. Despite arriving 40 minutes early and checking in, it was only 5 minutes before our allocated time that the staff told us that our shoes weren’t suitable as they needed to be fully closed in. This resulted in tears and me making a baking hot 15 minute run to the nearest Tesco to see if we could purchase yet more shoes, only to discover that it didn’t have a clothing department ( the staff member who directed me there was cursed repeatedly by me as I made my hot sticky way back to break the news) They promised us a full refund and then a round of ice creams dried the tears. Battersea Park is beautiful and has a fantastic playground and a pizzeria next to it ( which serves wine…yippee) so we whiled away the evening there. 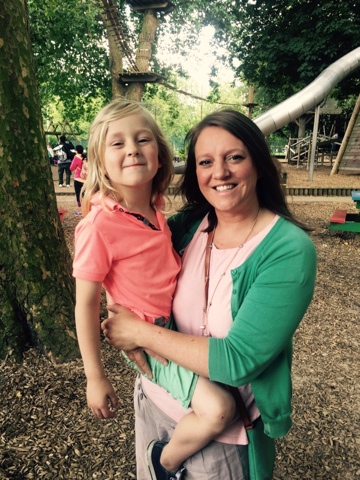 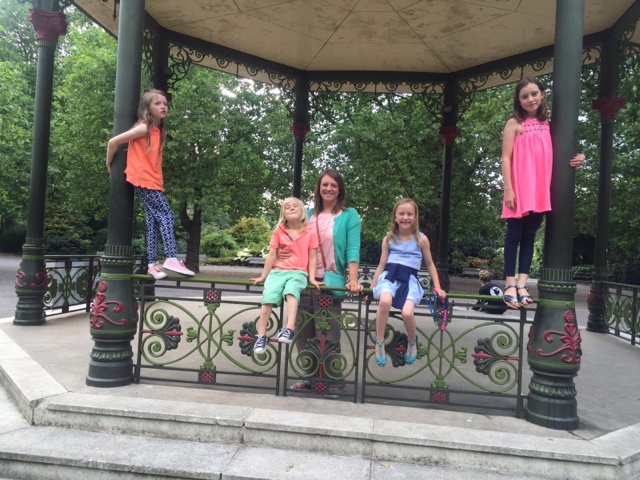 Our last day in London was spent in London Zoo. For some reason I always imagine that the bigger the city the better the attractions are, but this was definitely not the case here. London Zoo is good but completely pales into insignificance when compared with Dublin Zoo. The children enjoyed it and there was a wonderful butterfly section which was fascinating but if you have been to Dublin zoo then you would be disappointed with London’s version. 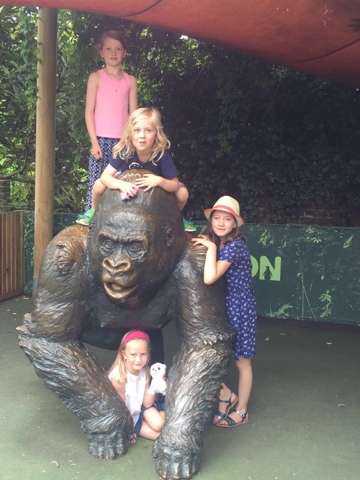 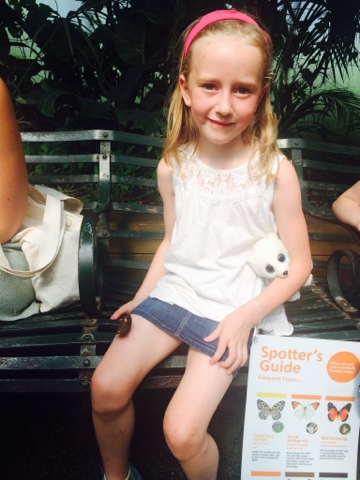 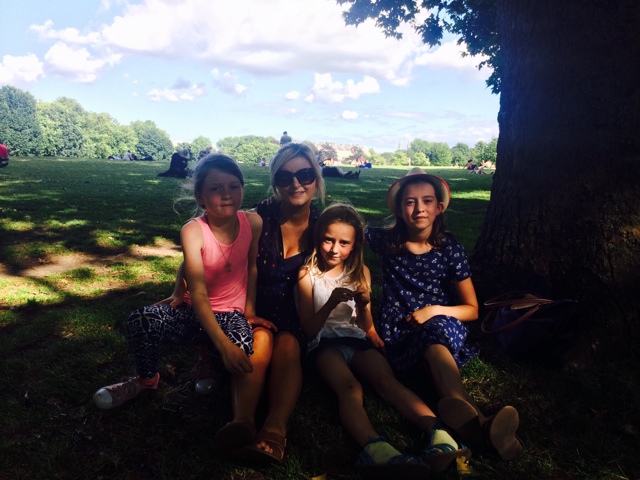 The public transport in London is both amazingly efficient and exhausting, my country bumpkins behaved exactly like country bumpkins on EVERY trip, no bus could be boarded without sitting on the top deck, regardless of the length of time we were going to spend on it, this was most like the cause of one unfortunate disembarkment when, having got the mini dictator off the bus I looked behind me to see two of the girls faces pressed up against inside of the closed bus doors, they were thankfully rescued before the bus actually moved off! The tube was also seen as a form of entertainment with competitions as to who could stand without holding the bars, apologies to all the foot owners who bore the brunt of this game! 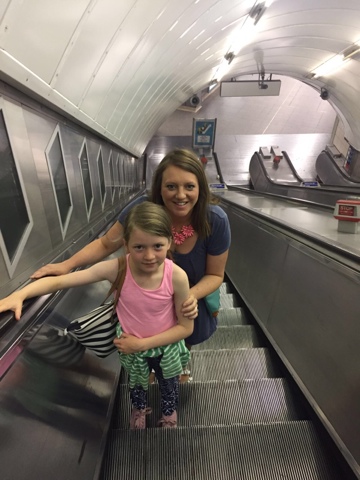 Three of the children were reasonably well behaved, the fourth was just himself, 3 parts demon: 2 parts dote. 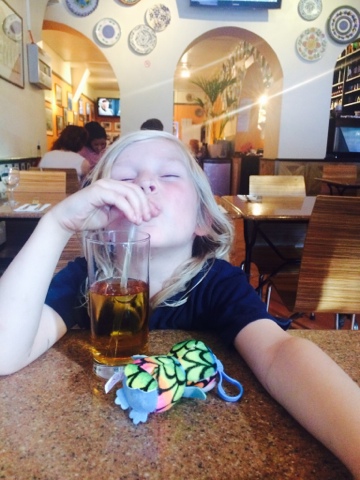 In fact the demon turned up at the airport and almost caused us to miss our flight home as he refused to have his face scanned to allow us through security, no amount of pleading could make him face the scanner and our flight was closing! The security man eventually had to concede and allow us through, when we reached the body scanners I was surprised that the Mini Terrorist alarm wasn’t triggered was he walked through.
It’s important to remember that your children are still your children on holidays, they won’t suddenly morph into a modern day version of the Von Trapp children, they will squabble as much as they do at home, it’s just that the time in between is so much nicer. 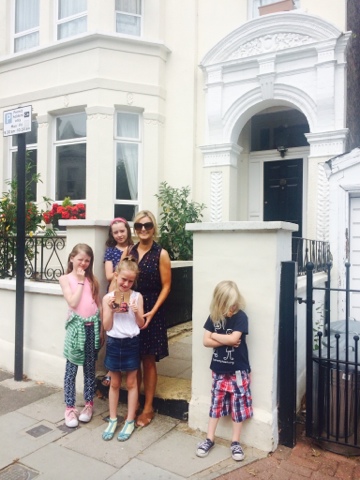 The children, on arrival home, declared it a ‘brilliant holiday’ and instantly forgot the rows and the crankiness. They already want to go back, but I think we need to give Aunty Jenny some time to recover!!!
We will also be sure to bring the right shoes with us next time!

3 thoughts on “London In The Wrong Shoes”