For as long as I can remember I have been a shoe addict, I would rarely take notice of the clothes a person was wearing but could describe in great detail their shoes.
A shopping trip was only a success if new shoes were purchased.

I have a very clear memory of returning from college one summer and while unpacking I thought it would be a good idea to line up ALL my pairs of shoes in my room. My father happened to pass the door and if I close my eyes I can still hear the exact pitch his voice reached as he ROARED at me about the ridiculous amount of shoes. The bluish-purple colour his face of rage turned was also a good indicator of how angry he was.
Putting four children through third level was bad enough but supporting someone’s shoe habit almost pushed him over the edge. Thankfully my sisters jumped in and claimed that a lot of them were theirs and his blood pressure returned to somewhat normal levels.
But my smug, pre-earning self couldn’t help but look contemptuously at him and declare,

“You can never have too many pairs of shoes”

Well, there has been a lot of water under the bridge since then and a lot of lessons have been learned. Like the time I went on holidays with my then boyfriend and brought 14 pairs of shoes for a ten day holiday, he introduced the ‘what you bring you carry’ rule and 16 years and 1 wedding later that rule still applies, suffice to say I pack more carefully since! 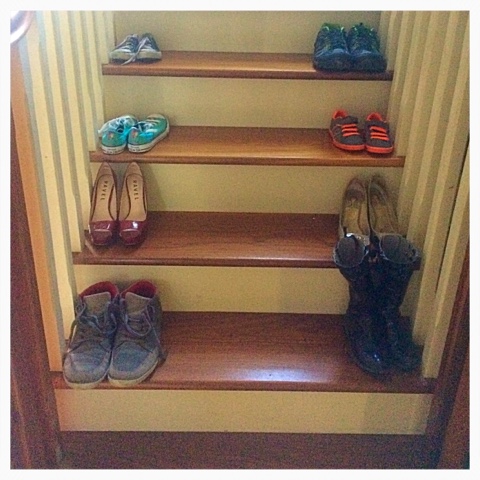 My shoe addiction has been hugely curtailed by the arrival of four children, and society seems to have decided that they should wear shoes…like every day! That’s a lot of non-stop growing little feet.
And so now instead of a house full of my shoes, we have a house full of theirs.
They are literally EVERYWHERE.
Inside the door, on the stairs, under tables, under beds, under chairs. The very fact that we have a shoe press, wherein the shoes should live seems to have bypassed them, either that or they are playing some hideous game where they try see how long a pair of shoes can go without being put in the press or mum losing her sh*#e over it.

At least 267 times a day I ask them to pick up their shoes, they seem to hear this request on average once a day!

One of their favourite places to leave shoes is by the trampoline. This in itself would not be a problem if it wasn’t for not one, but two, shoe loving dogs.
This pair seem to have an uncanny ablility to detect and select only the expensive shoes. Dunne’s best or cheap as chips canvas shoes go untouched in favour of any pair that has caused my wallet to weep upon purchase. Case in point this week when the newly purchased Sketchers were chewed and are now unwearable. 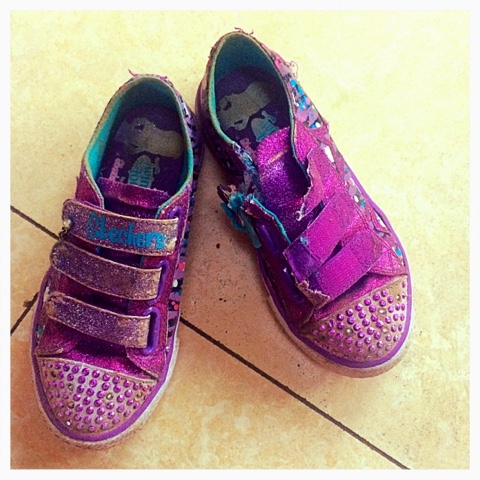 “At least they only chewed one” said the 6 year old owner of said shoes. Clearly in The Land of Six you can buy shoes in singles, unfortunately in the land of reality you can’t .

And so it would appear that Dad, if you are reading, you were right, you can indeed have too many pairs of shoes. And this is particularly painful if you are the constant picker-upper of these shoes and even more excruciating if you are the poor eejit who has to pay for them.

8 thoughts on “Drowning In A Sea of Shoes”