A few years ago, while on cria-watch, my daughter spotted movement in the shadow of the hawthorn hedge than ran the length of the field. She raced over to find a newly born cria, just delivered and already attempting to get up. A perfect black female, who was very nearly not spotted, so well camouflaged was she.

Naming honours were given to the child that spotted her and so we welcomed Shadow to the herd, oblivious at the time of how appropriate her name would turn out to be.

Less than a year later, when we were moving the alpacas from one paddock to another we noticed Shadow being left behind, she was upset because she couldn’t hear the low humming that the herd makes to communicate, and seemed to be walking into the fence and unable to find the gate.

Weeks of investigation followed, consultations with the Ophthalmology department in the Vetinary college and still no definitive answers. We knew that she had only gone blind in the preceding 3 weeks but could not figure out why.

She does seem to have some very slight light perception as when she is moving slowly, she can avoid large objects, this doesn’t work so well if she is startled. She can be difficult to catch as she has amazing hearing, and in order to catch her, you need to creep, stealth like, close enough to grab her, miss the first time and you are at nothing for the day, she will be on red alert and you may as well give up!

She copes really well within the herd, and is easily spotted as she holds her head unusually low. We hand fed her at the start, worried that she wouldn’t find the water and nuts that we give them, but after a while it was obvious that she didn’t require this.

Two years ago she had her first cria, a gorgeous boy, whom we called Bocelli, after the famous blind singer. Shadow was an outstanding, attentive mum and Bocelli in turn looked after her, being her guide when the herd were on the move. 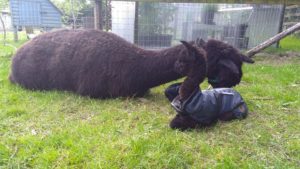 She failed to get pregnant last year, but just yesterday she delivered a stunning female cria,  and it is such a joy to see her fussing and bonding over her new baby, whom we have named ‘Darkness into Light’. 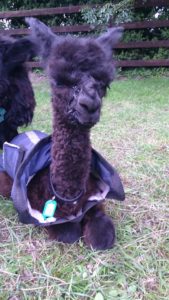 Every cria born on the farm is special, but this latest girl is just that little bit more special 💞

2 thoughts on “Farm Tales | The Story of Shadow”