Shepherd’s Pie…the mere mention of it used to set off all sorts of whining in my house, even from the grown up ‘child’ who would eat pretty much anything. I tried lots of recipes and persisted because as a busy mum it was one of those make ahead recipes that should have suited.

The dogs were delighted with my persistence, in fact they positively licked their lips ( do dogs even have lips?) whenever it appeared on the menu, himself began ‘working late’ on those nights though and the kids would have done similar if that option had been open to them and so finally I admitted defeat and stopped making it.

Friends of ours raise organic sheep and when the opportunity arose to purchase a freezer ready lamb I jumped at the chance. In amongst all the delights were some 1/2 shoulders of lamb…the perfect piece of meat for a long and slow cooking. 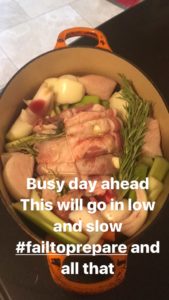 My intention of some pulled lamb was scuppered somewhat one busy Sunday and so a new version of Shepherds Pie was born. This one is wolfed down ( see what I did there😂) by all the family and so I’m sharing it here with you. 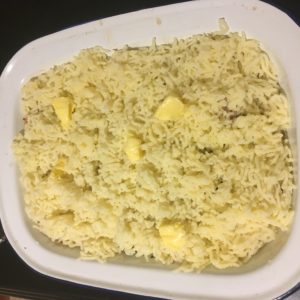 Obviously, it was only when it was loved the second time round did I admit to them that it was a version of  Shepherd’s Pie, to which they responded that these shepherds had taste…and hence the name. The turning point was not using minced lamb as the general consensus was that the combination of mince and mashed potatoes was making everything too soft!

3 or 4 cloves of garlic, skin removed

6 to 8 carrots, peeled and cut into quarters *

6 to eight sticks of celery halved*

Mashed potatoes, either leftovers of freshly made

The lamb will be rolled tied so in the centre there will be space to push in the rosemary sprigs and garlic cloves, this allows them to give maximum flavour without getting burned.

Place the lamb in a good sized casserole dish. Surround it with the carrots, celery and onions. Pour over the wine and stock and season with salt and pepper.

Put the lid on the dish and put it in the oven for 4 hours.

If you already have leftover mashed potatoes then you are free to do as you please, if not then it’s a good time now to make your mash.

After 4 hours remove the dish from the oven. Transfer the carrots and celery to a deep pie dish ( I find enamel ones work best for this) Remove the lamb and cutting the strings that are tying it, remove the rosemary sprigs and shred the lamb into bite-sized chunks, discard any fatty parts.

Place the lamb in the pie dish with the vegetables. Now strain the cooking liquid into a small saucepan and bring it up to a simmering point and add in the tomato purée. Place the cornflour in a jug and add enough cold water to dissolve it, then pour it into the sauce, stirring it all the time. Within a few minutes it will have thickened. Pour the sauce back over the meat and veg. Top this with mashed potatoes, I use a potato ricer to do this as it gives a lovely spiky finish which crisps up so nicely when cooked, but there is absolutely no need for this, a fork run over the top of the potatoes will have a similar effect.

You can now either put your pie in the oven for 45 minutes at 180 and have it immediately or you can allow it to cool and put it in the fridge until needed, I personally think it tastes better eaten the day after preparing it. Bring the pie to room temperature before cooking and cook for 55/60 minutes at 180.

Although Shepherd’s Pie isn’t a dish you would normally consider cooking for guests, it being reminiscent of childhood food, I think this method takes it to a different level and I know I’d be happy to see it on any hosts table. 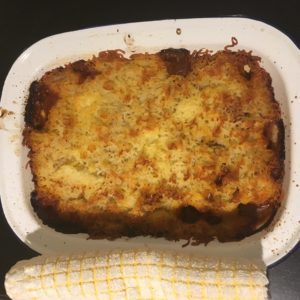 *its important to keep the veg quite big due to the long cooking time, if too small they will break up into mush.

*the flavour of lamb is quite strong, so I tend to use beef stock instead of lamb stock so it isn’t overwhelming

I strain the cooking liquid to remove the onions and any stray rosemary because I share my life with mini dictator who would object to these…it is not a necessary step for most civilised families!

I’m sure this recipe would work great in a slow cooker but as I haven’t yet tried it I can’t give guidelines for times.

3 thoughts on “If Shepherds Had Taste Pie”